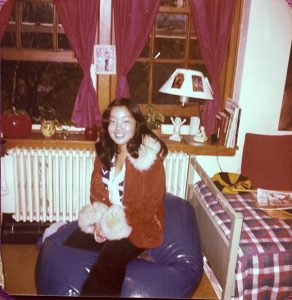 I was 16 years old when Roe became law – and I still vividly remember what it was like before and after it passed. My mother worked for Planned Parenthood starting in 1967, so I had an up close experience with the violence, hate and demonization of women demanding the right to control their bodies. In 1965, with Griswold v. Connecticut the Supreme Court ruled that married couples had the right to use birth control but it wasn’t until 1972 that in Eisenstadt v. Baird that birth control for unmarried people –single women– was legalized. One year later Roe v. Wade passed. Two years later, I left home to attend a large land grant university; there were no women’s health services on campus, which meant no access to contraception, routine exams, options information, etc. At 18, my activism was on these very issues – reproductive rights and sexual assault prevention on campus. Why? Because no one had been, or was looking out for the needs of young women. Today, history is repeating itself by dismissing the impacts of the decision to overturn Roe v. Wade on girls, young women and gender expansive young people.

The mainstream reproductive rights narrative has always centered “freedom of choice”, as if we all have the same choices, access, and privilege. Clearly, this is not true for girls, young women and gender expansive young people, particularly those of color and the many who are system impacted and who are–and have always been– invisible in the reproductive rights movement. Age, in and of itself limits our ability to access our rights and when it is compounded by other forms of oppression based on race/ethnicity, gender identity, sexual orientation, class, immigration status, and more, the life-long impacts are devastating. Moreover, society simultaneously adultifies and hyper-sexualizes girls of color who are left to deal with the violent and oppressive consequences of actions rooted in the implicit and explicit deeply held biases of individuals and systems. Regardless of intent – the damage these actions inflict lasts a lifetime.

National Crittenton advocates for reproductive justice – defined by SisterSong as the human right to maintain personal bodily autonomy, have children, not have children, and parent the children we have in safe and sustainable communities. Reproductive Justice as an organizing framework was coined in 1994 by Women of African Descent for Reproductive Justice. It is grounded in the internationally-accepted United Nations Declaration of Human Rights and combines reproductive rights and social justice in recognition of the critical exclusionary impact of the manifestation of intersecting oppressions such as racism on the ability of individuals to access these rights. Our work is focused on system-impacted girls, young women, and gender-expansive young people, centering those of color. We are particularly alarmed by how the overturn of Roe vs Wade will affect young people in foster care, involved with the youth legal system, and those being detained as unaccompanied minors.

The current dominant strategy for getting around the consequences of the Supreme Court decision in states is travel to another state. While we support this as a strategy, it has serious implications when it comes to youth who are in foster care or involved with the youth legal system and it is simply not enough. Traveling out of state to access reproductive gender affirming care could put them at risk of additional punitive measures if they are in the “care” of their home state. For example, they could be identified as a runaway or in violation of probation pushing them into the youth or adult criminal legal systems. Their ability to exercise “choice” in seeking reproductive health care is based on access made possible by the existence of strong advocacy, support and services that are safe, affirming and protects them against unintended serious consequences.

This is why National Crittenton is working intergenerationally and across systems to understand and address the complex web of barriers to their ability to access care. We responded to the overturn of Roe vs Wade by establishing the Reproductive Freedom Fund, and we are currently planning a series of national youth-led conversations among young people about their fears and needs in the context of the Supreme Court decision and their ideas and strategies for accessing reproductive justice.

I’ll be honest, to a great degree we are figuring this out as we go, channeling our rage into action to ensure that girls, young women and gender expansive young people are not invisible and again marginalized at this critical moment. If you truly believe, as is so often heard and said – that young people are our future, it is not an option to do nothing. We must break out of our silos, reject complacency, and take action even if the next steps are not always clear. If you do nothing, you are part of the problem.

That 18 year old activist is 65 now – and my hope is still fed by the brilliance, courage and passion of young people to shape a world that is more just, humane, and compassionate than what they were given. Now more than ever we need to work intergenerationally, learning from each other, respecting the leadership of young people, and learning from those who have walked this path before. Together, I do believe that we are unstoppable. The question is, how will you channel your rage into action?